Catch us at 3 p.m. on any given day, and chances are we’re planning our mid-afternoon snack (we see you, cheesy popcorn). In theory, this is smart: “Snacking is great when it’s used to tide you over until your next meal and can fill in gaps in nutrients you’ve missed at other meals,” says Toby Smithson, R.D.N., spokesperson for the Academy of Nutrition and Dietetics and founder ofDiabetes EveryDay. And while research has mixed results on how snacking affects your weight, healthysnack choices have been associated with lower BMI.

The only problem? Many snacks marketed as “healthy” actually aren’t. A good number contain sugars that raise your blood sugar and then cause an energy crash. Others contain empty carbs, lacking the fiber and protein needed to keep you full and energized.

For a healthy and sustaining snack, choose foods high in fiber, protein, and water, which fill up your stomach, let your brain know you are full, and take a while to digest, says Dawn Jackson Blatner, R.D.N., author and nutrition consultant to the Chicago Cubs. Read on for 12 sneaky snacks that might be sabotaging your health routine. Surprised? We were. 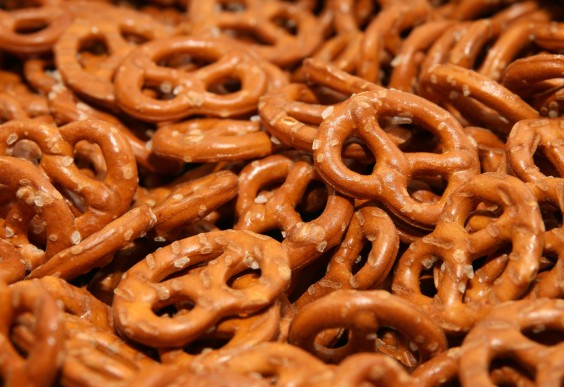 1. Pretzels
Though they’re often touted as “healthy” since they’re low in fat, pretzels aren’t doing your body any favors. Made from refined flour, they have little nutritional benefit. “Many varieties provide little fiber and virtually no protein, so they aren’t very filling,” saysKatherine Brooking, R.D., a nutritionist and Todayshow contributor. Plus, they’re easy to overeat, thanks to the salty flavor that’s almost addictive to our palates.

The better bet: Leave these guys out of the pantry, and opt for a handful of pistachios (shelling them makes the snack last longer too).

2. Energy Bars
We know, it’s so easy to toss one in your bag on the way out the door, but pre-packaged bars are often loaded with extra sugar, sodium, and calories that your body would be much better without, Brooking says. Some can pack up to 250 or more calories—but since they’re highly processed and relatively small in volume, they don’t tend to fill you up. “They are fine in a pinch, but you’re better off with snacks that have more volume and take longer to eat,” Blatner says.

The better bet: Opt for a healthier bar (we like KIND) that has no added sugars, natural ingredients you can name and count, and is a good source of protein and fiber. No matter which you choose, always check the label, Brooking says. Aim for at least 5 grams of protein and 3 grams fiber in less than 200 calories—and steer clear of any that contain more than 3 or 4 grams of saturated fat, trans fats, or any artificial ingredients or preservatives, says Brooking.

3. Smoothies
Don’t worry—we’re not hating on all smoothies here.Homemade ones can be delicious and nutritious. But many of the store-bought kind are chock-full of added sugars and calories, as they’re made from fruit and not much else. Remember, drinking calories is not as filling as eating them, Blatner says. Plus, the ones at your local smoothie joint are often super-size—not really the type of portion control you’re looking for, Brooking adds.

The better bet: A smoothie bowl! Make a half serving of smoothie, and top with fresh fruit, seeds, and nuts for more staying power and tasty crunch. Eating it with a spoon gives you the sensation of “eating” rather than “drinking,” which will be more filling, Blatner says. 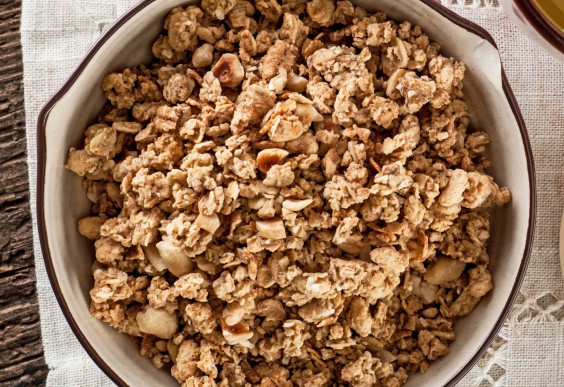 4. Granola
Your favorite yogurt partner is striking out. Turns outgranola is high in calories because of the extra fat and sugar it contains to make it taste so darn good. (For common brands, a mere 1/2 cup contains 210 calories, 4.5 grams of fat and 12 grams of sugar.) Plus, it doesn’t really have much staying power, since it’s low in water content, which is needed to add volume and better fill your stomach, signaling to your brain you are full, Blatner says.

The better bet: Eat it in moderation. Instead of grabbing handfuls straight from the bag, measure out a single serving, and opt for healthier (homemade if possible!) options that use natural sweeteners like honey and extra nuts for more protein. Or make a bowl of oatmeal, which contains more water.

5. Cold-Pressed Fruit Juices
Ah, the juice craze. Sure, juice cleanses sound healthy, but with all the fruit sugar crammed into each bottle, they’re not really doing your body much good. (Natural sugar is still sugar.) Cold-pressed or fresh-squeezed fruit juices without pulp can spike your blood sugar and ultimately make you even hungrier, says Joy Bauer, R.D.N., author, health and nutrition expert for the Today show, and founder of Nourish Snacks. To give you an idea, one bottle of green juice from a popular brand contains about 120 calories, 26 grams of sugar, 0 grams of protein, and 1 gram of fiber. What’s more—it contains two servings (who saves half for later?).

The better bet: Enjoy a juice that is purely vegetable-based and contains less natural sugars and carbs, or, for an even healthier option, just eat whole fruits and veggies, Bauer suggests. Enjoy a few protein-packed nuts on the side for a more well-rounded snack.

6. Popcorn
Munching on popcorn during a movie can be a wiser option than diving into a pint of ice cream, but it’s still not optimal—especially when it has butter or sugars added, like common microwave or bagged butter or kettle corn popcorns. In addition, some microwave popcorns contain a chemical, diacetyl, that artificially adds a buttery taste and has been associated with lung disease and poor lung function (known as “popcorn lung”). While this is more risky for people who work in a popcorn manufacturing facility, consumers should be aware.

The better bet: Look for a popcorn with no added sugars, hydrogenated oils, or trans fat. Better yet, make your own at home in an air-popper, or check out theGreatist Approved Groceries list for healthier, store-bought versions. 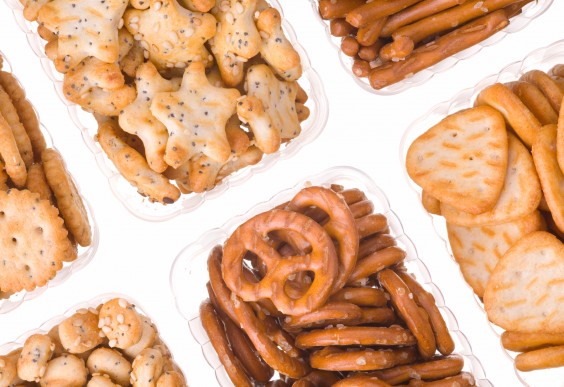 7. 100-Calorie Packs
“Surveys show that a full 25 percent of daily calories are now coming from snacks, so it’s really like a fourth meal,” Brooking says. “Unless you are doing a lot of endurance training or have high-calorie needs for other reasons, snacking can easily add up to extra unwanted pounds.” But even portion-controlled snacking has its pitfalls. Just because you’re only eating 100 calories worth of food doesn’t mean it’s good for you—100 calories of cookies, probably not the best choice. They’re also highly processed and typically lack satiating nutrients like protein and fiber.

The better bet: Grab a handful of nuts, like pistachios or almonds. If you stick to a one-ounce portion, you’ll get plenty of nutrients for just over 100 calories, which will be a lot more satisfying than a nutrition-less snack pack.

8. Cereal
Pouring yourself a bowl of cereal is the quick solution to an empty stomach, but most snackable cereals are—you guessed it—full of sugar and carbs that don’t really fill you up and just keep you coming back for more.

The better bet: All cereals aren’t bad for you, in fact,new research shows that cereal can be a great source of fiber, an important nutrient that Americans aren’t getting enough of. No need to shun the cereal aisle altogether—next time you’re there, just reach for ahealthier box.

9. Sushi
We love sushi for a quick meal or snack just as much as the next Seamless addict, but it’s time to accept that it’s not as healthy as we might like. Your favorite rolls contain a lot more white rice than you’d expect (one roll can have one cup), which spikes your blood sugar levels. And while it may be obvious, those “crispy” (a.k.a. fried) rolls, mayo-based sauces, and imitation ingredients (like crab) simply aren’t great for you.

The better bet: Next time you hit up the sushi restaurant, shift your gaze to the sashimi that’s just plain fish without rice. Or swap white rice for brown, a healthier, whole-grain carbohydrate. 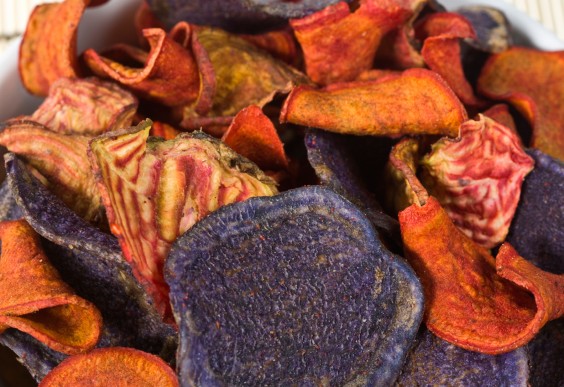 10. Chips (Even “Veggie” Chips)
Baked chips are typically marketed with health claims, but while they may be a tad healthier than the fried kind, there aren’t many benefits to these crunchy snacks. Need proof? Just check the label. Any chips (even healthy-sounding quinoa chips) made with mostly refined corn flour won’t do a great job of keeping you full. One exception: “Sometimes when the veggie chips are actually made from dehydrated vegetables, they will have a good dose of vitamins, minerals, or fiber,” Blatner says.

The better bet: Craving crunch? Try some veggies and some type of protein: cucumber slices with an easy dip, like Greek yogurt and dill, or bake up some kale chips at home. Or if you really want good old-fashioned potato chips, go for a bag on our Greatist Approved Groceries List—and pair with hummus or a Laughing Cow or Mini Babybel cheese for staying power.

11. Low-Fat Dairy
Store packaging and sales gimmicks try to make us think that no fat is better than some, but that’s not quite right. Milk fat contains CLA (conjugated linoleic acid), which research suggests may help burn fat and build muscle, Blatner says. So it’s actually good for you in moderation (like all things!). Plus, in fat-free or low-fat products, the missing fat is usually replaced with sugars, cautions Blatner.

The better bet: Go for whole or 2-percent milk products (like string cheese or yogurt)—they’re healthier and taste better too.

12. Snack Boxes
Snack subscription boxes have hit the market in a big way—but it turns out they’re not as healthy as advertised. Many are filled with extra ingredients, and all the choices in front of you may encourage you to eat more. “Whenever you have variety in flavors, it’s extremely hard to feel full since variety stimulates appetite,” Blatner says. Meaning you’ll have a very hard time stopping if you have a gourmet mix of all sorts of nuts, seeds, fruits, chocolates, and more sitting in front of you.

The better bet: Replace that snack pack with a handful of raw almonds or peanuts and some fresh grapes or an apple. You’ll still get a nut and fruit flavor, but you’ll feel full and energized, rather than wanting to reach for another pack.