What can apple cider vinegar do for you? If you’re a regular reader ofhealth and wellness blogs, you probably think the answer is: EVERYTHING! ACV (as the cool kids call it) is so commonly touted as a safe, natural, and completely effective panacea that it probably deserves its own sketch on Portlandia.

But if you’re a bit skeptical that a tart liquid made from fermented apples can cure diabetes, banish acne, soothe a sore throat, whiten teeth, banish dandruff, and basically make your life perfect in every way, we can relate. With all the fuss about apple cider vinegar, we had to look into what science actually says. If you’re a diehard devotee, you may want to look away.

What the Science Supports 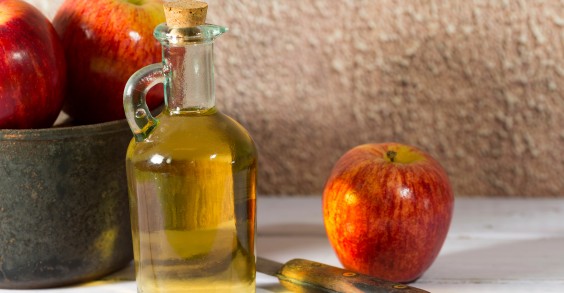 Considering how much recognition ACV gets as a cure-all, you might think there’s tons of research to support those claims. Well, right now, that’s not the case. “The scientific literature on humans ingesting vinegar is very, very limited,” says Carol Johnston, Ph.D., R.D., who studies the medicinal uses of vinegar at Arizona State University. However, there are a few things that scientists have found ACV can do for you.

You know that light-headed, low-energy feeling you sometimes get after chowing down on too many refined carbs? That’s your blood sugar spiking—and then crashing down. The acetic acid found in ACV (and most other types of vinegars, like white vinegar and red wine vinegar) contains anti-glycemic properties, and studies show that consuming apple cider vinegar before a meal can help keep those kinds of spikes at bay. This could, in theory, have something to do with why people who take ACV claim that the stuff boosts their mood and energy, says Los Angeles-based holistic nutrition and wellness coach Nicole Granato.

The blood sugar benefits might even spell good news for people with diabetes, though researchers still have more to figure out. “If they follow a protocol of drinking some vinegar before every meal for a year or more, does that reduce reliance on insulin medications? Reduce the progression of their disease? Those questions haven’t been answered yet,” Johnston says.

2. It can fight bacteria.

ACV has been used to combat infections like ulcers and sores since the time of the ancient Greeks. In fact, there are plenty of studies documenting vinegar’s antimicrobial effects. But just because ACV is capable of fighting bacterial infections doesn’t mean that using it to do so is actually a good idea. Because it’s so acidic, pouring it into your ears for an ear infection or using it on open sores or cuts is almost guaranteed to irritate your skin. It’s not safe to use by itself for a sore throat, either, because it could do more harm than good. “You shouldn’t gargle vinegar. There have been cases where people have ended up in the hospital because they accidentally choked on it,” Johnston says.

3. It can soothe jellyfish stings.

Weirdly, research shows that if you happen to get stung by a jellyfish, dousing the affected area in ACV may help. It can deactivate nematocysts, the sharp barbs that jellyfish use to inject their painful venom. But experts say that warm water can have a similar effect—without irritating your skin the way ACV may.

What’s Not So Clear

As for the rest of the miraculous stuff you often hear, most of it is TBD. For now, the majority of these claims haven’t been studied.

1. It improves your skin.

Anecdotally, there are plenty of people who say that applying ACV to their faces helps get rid of acne and improve their skin’s texture. “I have clients with chronic acne who steam their face with diluted apple cider vinegar, and within two to three weeks, there’s a difference,” Granato says. And since ACV contains antimicrobial properties, it could help acne-prone skin, she says. But for now, there aren’t any studies out there to prove it.

A handful of studies have shown that putting acetic acid on your skin can destroy wart tissue. But this research used super high concentrations of the stuff (up to 99 percent). Since ACV and other vinegars are only around 5 percent acetic acid, they wouldn’t be nearly strong enough to kill a wart.

3. It clears up dandruff.

Though an ACV rinse might make your hair look shinier, there’s no credible research to support the idea that it can clear up dandruff. (Johnston had never even heard of this until we asked her.)

ACV’s antibacterial properties could conceivably help get some plaque and germs off of your teeth, Granato says. However, there isn’t evidence to show that ACV can whiten teeth. In fact, it’ll probably leave your pearly whites in pretty bad shape. “I can’t advocate whitening your teeth with apple cider vinegar at all,” Johnston says. “We don’t have a lot of acid protection in the mouth, and you don’t want to lose the enamel on your teeth.”

The Safe Way to Use Apple Cider Vinegar

Apple cider vinegar’s acetic acid contains some beneficial properties, but in high concentrations, acedic acid can be a poison. So if you’re going to drink the stuff or use it on your skin, you’ve got to be careful.

Both Johnston and Granato agree that the best way to use ACV is in tiny doses. If you’re drinking the stuff, swig a tablespoon diluted in at least eight ounces of water no more than twice a day. And always chase it with food, which can help clear the acid out of your throat faster and prevent irritation, Johnston recommends.

The same principle applies if you want to try using it on your skin. Dilute a tablespoon of ACV in a bowlful of hot water and dunk a face towel or rag in the mixture. “You can steam your face with the rag for 12 minutes,” Granato says.

Most of the research on apple cider vinegar has looked at its effects on blood sugar, and those studies seem to pan out. Experts accept that ACV has antibacterial properties too—but because vinegar is harsh, it’s not the best choice for treating sore throats or wounds (except those jellyfish stings). As for the other stuff, there’s no scientific data to support using ACV for better skin, less dandruff, or whiter teeth. What’s more, it might be harmful. If you decide to try using it anyway, proceed with caution. “This is an instance where more isn’t better,” Johnston says.