When I saw an ad for Ample, a brand new “meal-in-a-bottle,” I was intrigued. Ample is a 400-calorie shake made with “real-food” ingredients that you mix with milk or water. While liquid diets and cleanses get a bad rap in the wellness world (and just generally sound miserable), recent research showed Soylent, a vegan meal replacement shake, is more nutritious than the standard American diet.

I thought it’d be interesting to ignore that suggestion and put the company’s meal-replacement claim to the test. Ample hooked me up with 30 shakes, and my liquid odyssey began.Right now Ample isn’t available in stores, but the company has raised 735 percent more than its $50,000 goal on the crowdfunding site Indiegogo. Itrecommends drinking Ample as a part of your daily routine—for breakfast, lunch, or a snack; when you’re busy or traveling; or post-workout. The company doesn’t suggest having more than two shakes per day: “Not that it would be unhealthy,” the website states. “We just recommend that you recognize the value in eating real food!” 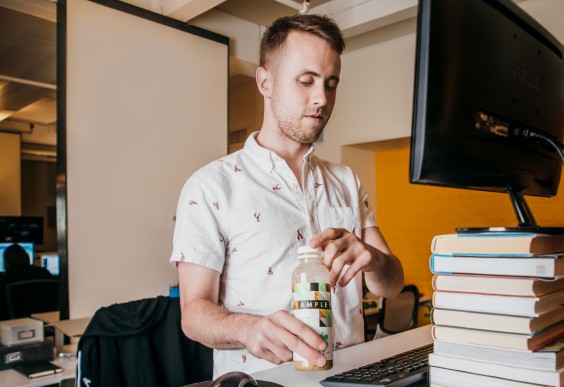 I planned to drink four bottles per day (equaling roughly 2,000 calories when mixed with whole milk). My goal: increase productivity with no noticeable drop in energy. For me it wasn’t about losing weight; in fact, I was hoping to put on some weight.

My first sip of Ample was the best it ever tasted, which was surprisingly good. The shake has what is best described as a graham cracker flavor with a hint of peanut butter. My second drink, which I had at lunch later that same day, still tasted pretty alright. But by my third shake, the craving for a bit of variety set in.

My digestive system was what I was most worried about. My mom kindly asked what I was going to do about “roughage.” My friends were a bit more blunt, sending sarcastically supportive texts that always ended with the same question: “Have you sh*t yourself yet?” I’m happy to report that I didn’t ruin a single pair of underwear, but there were a few close calls.

I began day three in high spirits, mixing Ample with an increasingly eclectic mix of ingredients, which brought some much needed variety into my chalky-flavored life. And my productivity was at an all-time high. It’s amazing how much more time you gain by cutting out breakfast, lunch, and dinner.I finished that third day by peeing for the eighth time before leaving the office (turns out, you piss like a horse on an all-liquid diet) and walked to the subway. My commute is 14 stops. I made it four before the overwhelming urge to poop set in. By the time the train reached the fifth stop, I was confident I’d need to use my emergency underwear. (Believe it or not, I always keep a change of clothes with me, not just when I’m doing something stupid for work.)

I jumped out of my seat and booked it up the subway stairs, disregarding the angry looks as I shoved my way through the rush-hour crowd. I saw a Starbucks logo smiling down at me with open arms. Waddling across a four-lane avenue, I almost defecated from fear as cars whizzed past.

Apparently you’re supposed to make a purchase before using the bathroom at Starbucks. So I essentially threatened to sh*t on the floor if they made me wait in line to buy something. They didn’t seem phased (Starbucks workers must’ve seen some crazy stuff), but we finally compromised: I could skip the line to buy my glorified bathroom pass. I bought the first item I saw (a small tin of mints) and ran to the bathroom with the code on my receipt.

I’ll spare you the details of how the toilet looked when I was done. All you need know is that there is a moment of reflection that comes only after you break a liquid diet with breath mints in a Starbucks bathroom. 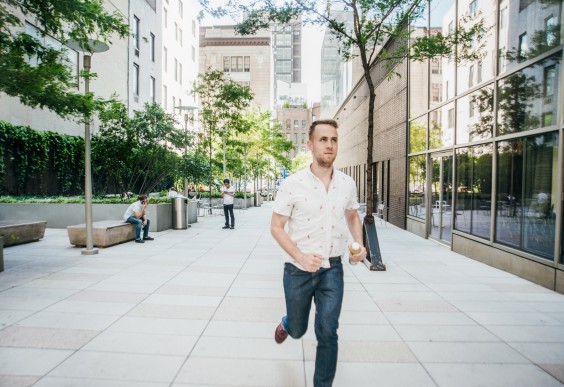 After my bathroom ordeal, I figured I’d earned a real cheat meal. I met up with a college friend who insisted I eat at his country club if it was going to be my only meal for the week. That dinner was one of the best I’ve ever had. Not only was it the first solid food I’d had that week, but it was easily the fanciest restaurant I’d ever eaten at. I’m pretty sure no steak burger or fries will ever match that practically spiritual meal (I’ll genuinely never forget the salty crunch of pickle as I took my last bite).

My friends started to drink after dinner, and being a sucker for peer pressure and bad ideas, I decided to mix my Ample with a beer. I’m sure there’s a way to make alcoholic Ample taste good, but mixing it with Natural Light is definitely not it. The beer gave the shake a bitter-but-not-overwhelming flavor, similar to what I’d imagine a mix of protein and dehydrated urine to taste like
What followed was probably my second most memorable bathroom experience ever. That’s two digestion issues in 24 hours, folks. The beer felt like fire in my belly, and the steak I’d enjoyed hours earlier became a bowling ball in my bowels. The combination made sleep nearly impossible, and I felt like I was passing an anal kidney stone the next morning.

The Aftermath
Overall my experience with Ample was a net positive. My biggest complaint was that the drinks were a bit repetitive, but I was expecting that since they were all the same flavor. Hot chocolate powder, cinnamon, or a bit of hot coffee mixed really well with Ample. Nutmeg, beer, and cold brew coffee made it practically undrinkable.

My bathroom issues (which wouldn’t have been a problem if I’d had more solids, as recommended) were mostly caused by ignorance. There’s no gray area on a liquid diet: You either need to poop immediately, or you don’t need to poop at all. It’s also hard on the digestive system to transition back to solids after a week of only liquids, which isn’t super surprising.

I’m confident the drink would work wonders as a quick and easy replacement for breakfast or lunch or both. It may not taste as good as a steak sandwich, but getting all your necessary calories and nutrients in about two minutes is pretty amazing. I expected to need periodic snacks, but Ample was actually filling.

It’s going to be at least a month before I have another one of the shakes though. There’s a handful of them sitting under my desk taunting me, but I don’t plan on drinking one until I stop having graham cracker-infused dreams.