The Pros and Cons of Medical Marijuana 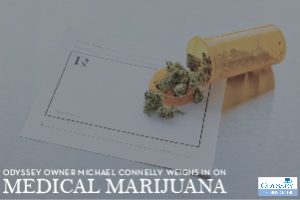 One of the most hotly debated topics in the world of medicine involves medical marijuana. There are a number of people on both sides of this debate that make very valid points. With all of the studies showing just how helpful cannabinoids can be in the treatment of things like pain, neurological and sleep disorders, many people are demanding this plant be legalized for medicinal use.
Some people on the other side of this debate cite studies showing that long term use of marijuana can lead to a decrease in brain function, as well as heart and blood pressure issues. We recently discussed how medical marijuana fits into the addiction treatment field with Odyssey Center founder Michael Connelly and this is what he had to say:
Does Medical Marijuana Belong in the Mental Health Treatment Field?

One of the main things most addiction specialists are worried about is the use of cannabis in their field. When we asked Mr. Connelly about this issue, he pointed out a few good observations:

Another important question we had for Michael Connelly was whether or not Odyssey Center was currently offering training for marijuana addiction? He stated that none of the classes currently offered at Odyssey Center specifically deal directly with marijuana abuse. There are, however many discussions among faculty and students regarding the misuse of this substance and what role it plays in treating various ailments. Because it’s a CAC training facility, they talk about numerous drugs and marijuana is one that they have been discussing more frequently.

The Decriminalization of Marijuana

Michael Connelly believes that decriminalizing the use of marijuana, both recreationally and medicinally is the best course of action. Many people see the criminalization of this substance as a mistake and something that has torn families apart. The effects of this drug are far lower than the damage that criminalization have caused around the country. If people are sentenced due to marijuana possession, it really doesn’t do any good and can be detrimental to their mental health.

Should Doctors Use CBD to Treat Psychological or Neurological Disorders?

While there has been a variety of studies on the effects of CBD, there is of course always room for more research. Most people are unaware that CBD does not produce the high that the marijuana plant does. The only reason most people oppose the use of this substance is due to the stigma surrounding anything relating to marijuana. They think anything related to marijuana involves smoking or  getting high, which isn’t the case. If it can provide substantial benefits to those who struggle with things such as neurological disorders, he believes that doctors should recommend the plant for medicinal use. It’s not fair to ban a substance that might help patients in the long run, especially when patients are desperate and other medicines aren’t working.

Only time will tell whether or not marijuana will be legalized. With nearly 60% of the people in this country supporting legalization, it seems like it is only a matter of time before this becomes a reality.