Pasta has a well-deserved rep as the perfect dinner food: It’s easy to cook, the topping possibilities are endless, and let’s be real—it’s delicious. But if you’re sticking to a low-carb diet, starchy noodles don’t exactly fit the bill.

That’s where spaghetti squash comes in. Compared to pasta’s 43g of carbs per cup, spaghetti squash contains only 7g. And while the squash strands may not taste exactly like our favorite pasta, they do bring a satisfying and sweet flavor to the table. Although cooking spaghetti squash isn’t as foolproof as boiling a pot of water, it’s actually really easy when you follow these step-by-step directions. In a rush? Opt for the microwave. But if you have some more time and are looking for a crispier, al dente finish, try the oven.

1. Poke holes into the outside of the gourd.

Use a fork or knife to poke at least eight holes in the gourd. This allows steam to escape from the spaghetti squash when it’s cooking and will prevent any explosions in the microwave.

2. Microwave, cool, and cut in half.
Microwave on high for at least 15 minutes. Pat the sides of the squash to see if they’ve gotten softer—that’s a good indicator that it’s cooked enough. If the sides are still hard, add three more minutes. Let cool for at least 10 minutes, then cut in half using a large chef’s knife. 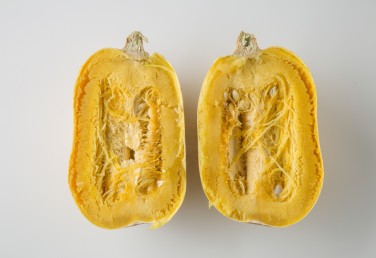 Use a spoon to remove the seeds from the inside of the spaghetti squash. Some strands will inevitably come out as well—that’s totally fine. You can save the seeds to roast for later.

Use a fork to pull the spaghetti-like strands from the gourd. Make sure to line up your fork with the direction of the strands on the squash. Pull the strands into a bowl, and they’re ready to eat!

1. Preheat oven, cut gourd in half.

Preheat the oven to 400 degrees. Then cut the gourd in half using a sharp chef’s knife. Spaghetti squash are notoriously difficult to cut. Use the tip of the knife to break the skin and then pull down using the rest of the blade. (And be careful!)

Use a spoon to remove all of the seeds. This step is harder when you roast because the squash is still uncooked, but it’s nothing a little elbow grease can’t fix. Save the seeds and roast later for a light snack.

Drizzle two tablespoons of olive oil and season with salt and pepper. Place the two halves cut-side down on a baking sheet with tin foil or parchment paper. Cook for at least 45 minutes. You’ll know it’s done when you can easily stick a fork into the skin. Let cool for at least 10 minutes.

Use a fork to pull the spaghetti-like strands from the gourd. Make sure to line up your fork with the direction of the strands on the squash. Pull the strands into a bowl, and they’re ready to eat! 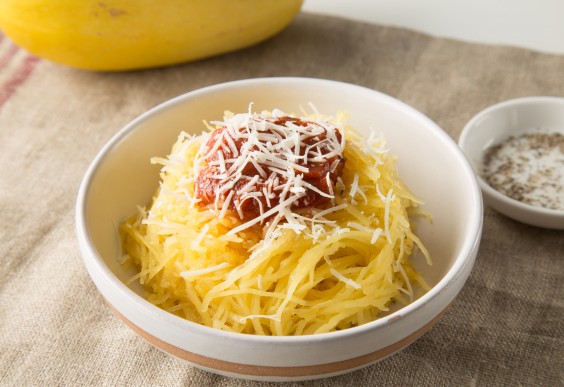 You’ve done all of the hard work, and now we’re at the fun part: adding an extra dose of flavor. We love topping spaghetti squash with marinara sauce and grated Parmesan cheese. It’s also great withbasil pesto or Alfredo sauce. Or top it with salsa, sliced avocado, and a fried egg. You pretty much can’t go wrong