27 Meals (and Desserts) You Can Make in a Mug

The microwave gets a bad rap these days, but when you’re running late or only have 10 minutes between errands, tossing a few ingredients in a mug for a healthy and tasty meal in five minutes flat doesn’t sound too shabby. And all that hype about microwaves causing health concerns—well, it’s just that. (There’s not really enough evidence to suggest they release enough radiation to be harmful.

These breakfast, lunch, and dinner recipes are surprisingly flavorful and can be carried to work and cooked on the spot. If you’re really anti-microwave, most of them can easily be made in the oven if you have a few extra minutes to spare. While the desserts might not be the most nutritious, they are the most delicious. And who would say no to chocolate cake that only takes five minutes? Certainly not us. 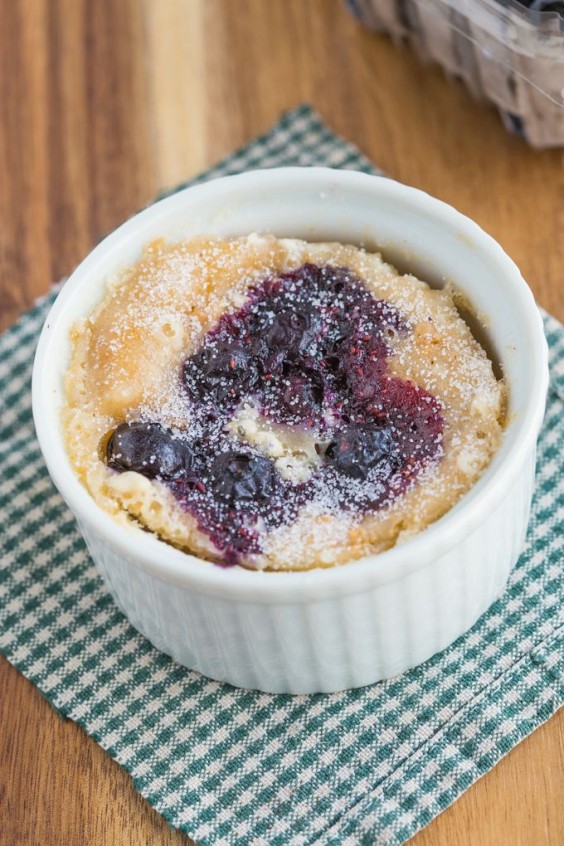 Ok, so it might actually take two minutes. Inspired by the blueberry muffins at Starbucks, this version is healthier, faster to make, and tastier. Banana adds a little extra potassium and staying power to this breakfast of champions. And if you’re in it for the long haul (12 minutes), you can make it in the oven.

It’s like dessert for breakfast—but good for you (and it only takes five minutes to whip up). A pinch of cinnamon and chili powder adds a spicy twist to the sweetness of the coconut. And while the recipe calls for stevia, you could use any natural sweetener (like honey). It’ll still taste amazing.

3. Frosted Cinnamon Muffin in a Mug

We’re all about this muffin in a mug, especially when it’s fall and we want cinnamon in everything. Substitute a natural sweetener like maple syrup or honey if you don’t use stevia, and if you’re running short on time, skip the frosting—you won’t miss it (that much).

4. Coconut Chai Muffin in a Mug

Coconut + chai = a match made in heaven. This recipe might sound like the kind that’ll lead to a sugar high, but the natural coconut, almond meal, and flax meal keep it healthy and filling. The cream cheese frosting makes for a tasty weekend treat, but we still devour it without.

The perfect excuse to eat cake for breakfast—after all, it’s oatmeal and peanut butter, what cake could be healthier? Just mix it up, toss in the microwave, and you’re out the door with a breakfast that won’t leave you frantically rummaging through your desk for snacks one hour later.

6. Microwave Pancake in a Mug

Pancake à la souffle. It’s fluffy, it’s a pancake, and it’s in a mug—it’s everything we could want. Add some blueberries for a sweeter version or cheese if you’re craving savory. Just don’t forget the non-stick spray, or else you’ll have a very sad-looking mug at the end of your meal.

7. Sweet Potato Hash in a Mug

This one takes a bit longer—11 minutes—but we’re talking potatoes here. The sweet potatoes mixed with savory veggies and cheese are a perfect combination, not to mention sweet potato’s great nutritional benefits, like its anti-cancer and anti-inflamatory properties. The touch of rosemary at the end adds the perfect finishing flavor.

8. Egg White Omelet in a Mug

Not to worry, egg lovers, we’ve got you covered too. This recipe calls for egg whites only, but feel free to use the yolks as well—they won’t hurt you. This blend of spinach, peppers, and tomato is awesome, but you can substitute any veggies or meat for a create-your-own style.

9. Crustless Quiche in a Mug

A warm and delicious way to get your veggies for the day, this recipe tastes rich and flavorful while staying healthy. Be prepared: It calls for an oven, so while it’s super simple to mix up, the baking time is longer. If you’re in a pinch, the microwave would work as well.

This recipe loads up on the good stuff—quinoa and pumpkin—and uses maple syrup to sweeten it up. Pop one of these bad boys in the microwave before work for a seasonal dish that doesn’t go overboard.

Perfect for a quick a.m. meal, especially if you have some cooked quinoa on hand. Throw in whatever greens or veggies you have lying around, and you’re set. You’ll get your morning egg fix, and the quinoa will keep you charged for hours. Hello, productive workday! 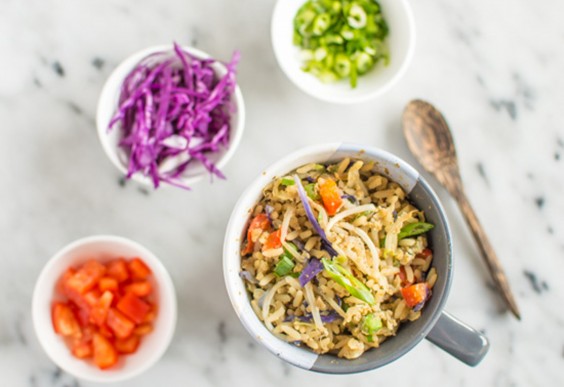 Who knew you could make fried rice in a microwave? This recipe hits all the right (flavor) notes, and no one would ever guess it takes only a cup, a microwave, and a few (okay, maybe a bit more than that) ingredients. Just don’t skimp on the cup size—we’re talking a meal here.

Great for a chilly winter day, this soup can be enjoyed at home or at the office. (Regardless, it’s an easy and homey solution to the lunch hour dilemma.) Throw in extra veggies or substitute—there’s really no right or wrong way when it comes to soup. The egg adds a little extra oomph and protein to cut the midday slump.

14. Homemade Microwave Spaghetti-ohs in a Cup

Yep, you read that right: Spaghetti-ohs (cue your ecstatic inner child)—only the adult version, which still only takes seven minutes to make and will have you reminiscing about the good old days. Fun tip: Freeze the leftover sauce in ice cube trays, then just pull out and thaw when you’re in a rush.

Naturally, no mug recipe list would be complete without the tried-and-true mac n’ cheese. Only three ingredients—we don’t count water—and you’re on your way to comfort food heaven, minus the craft, pot, and mess.

16. Minute Microwave Lasagna in a Mug

All you need is a minute—plus the thirty seconds it takes to throw the ingredients in a mug, but we’re pretty sure you can deal with that. It’s all the lasagna flavors you love sans noodles. Substitute in the meat, veggies, and sauce you want (you can even use pesto), and voila! It’s like Little Italy came to you. 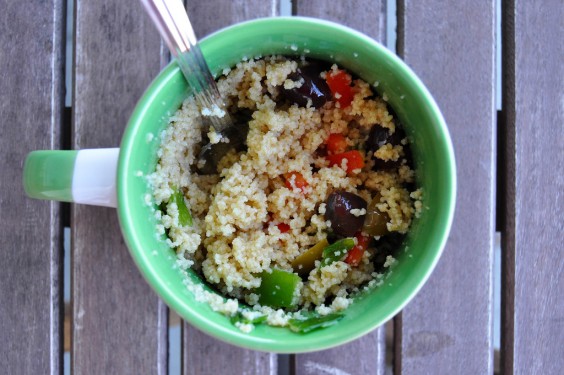 A few more ingredients than the rest, but we bet you’ll be able to whip this up faster than the time it takes for the delivery guy to knock on your door. A healthy but filling salad perfect for lunch or dinner (or even for snacking in between), couscous is way better for you than refined carbs like white rice or flour—but it still curbs hunger.

The one time it’s quicker than going to Chipotle, and you can still have all the mix-ins you can’t do without—just make sure to keep them on hand. This burrito in a mug hits the spot day or night, and it’s the perfect solution when you’re just too tired to do one more thing.

Another reason to indulge your fall pumpkin cravings. As far as desserts go, this one’s pretty darn healthy—and gluten-free, although you could replace the coconut flour with regular if you’re in the mood for the full whammy. Whatever you do, don’t leave out the chocolate.

You’ve gotta love PB for this one. It’s a cupful of pure peanut-ty goodness and calls for (five!) ingredients you’re bound to have on hand, so you can whip it up at a moment’s notice. 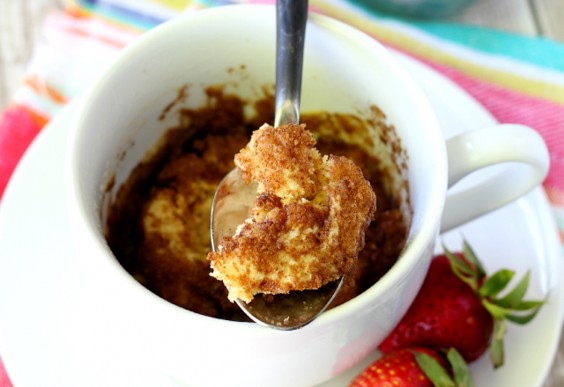 Six minutes ’til heaven—warm, cinnamon-y, gooey heaven. And with maple syrup for sweetness, it’s not all that bad for you either, especially if you opt for whole wheat or spelt flour instead of white. We’ll just take breakfast and make it dessert.

Apple pie made easy. You can go the traditional oven route, but if you’re looking for a really quick treat, it takes only two and a half minutes in the microwave. Top it off with a little ice cream and ta da! Gourmet gone simple.

We’re not typically fans of adding dye to anything edible, but when it comes to red velvet cake, we can’t help ourselves—especially if it’s a cute single-serving cake! This is the ideal recipe to enjoy on a night in, and you won’t have to worry about leftovers tempting you later.

Our happy place usually involves chocolate—the more, the better. This recipe does chocolate right, and you don’t even have to pull out a cake pan. Five minutes and you have a perfectly cooked brownie begging for a scoop of ice cream. Just be careful to not overcook, or it’ll get tough and rubbery. 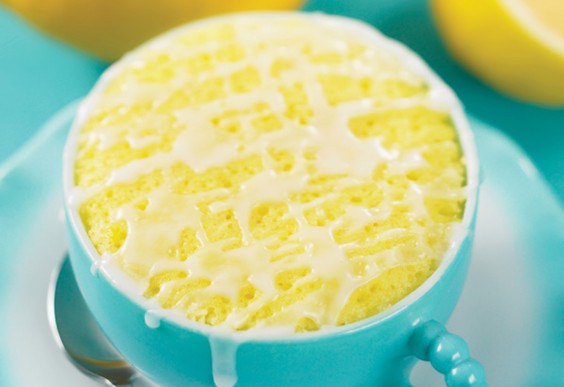 For the citrus fans who don’t go gaga over chocolate, this one’s for you. Plan for about one lemon per mug cake—the rest of the ingredients you should already have on hand. It’s the perfect blend of sour and sweet, ready in minutes.

It doesn’t get simpler than this—only a few ingredients, a mug, and a microwave. You can even leave out the crust if you’re in the mood for pure pumpkin. You can use regular sugar or stevia, but we like maple syrup or honey best.

27. The Most Dangerous Chocolate Cake

So “healthy” might not exactly apply here, but we couldn’t pass over the Nutella. Next time you’re down or just need a chocolate pick-me-up, we’ve got you covered. Just grab a mug and spoon and carve out five minutes of Netflix time.