Somewhere between giving thanks and reaching for that second slice of grandma’s pumpkin pie, it hits—the “food coma.” While it’s common to feel tired after a big meal (especially a holiday feast), research shows it’s more than the tryptophan-filled Thanksgiving turkeys that can lead to a post-dinner snoozefest.

Don’t Blame the Bird—Why It Matters

The truth is, turkey doesn’t even contain that high a concentration oftryptophan, the sleep-inducing amino acid, compared to other types of poultry, pork, and even cheese. So what’s the science behindpostprandial somnolence, the fancy name for the sleepy, sluggish feeling that strikes after eating a big meal?

For starters, holiday menus don’t tend to shy away from high-calorie and high-fat dishes. And when second (or third) helpings of those heavy-hitters go down, blood flows to the digestive system to ramp up its efforts. As a result, the rest of the body’s systems (including the brain) can start to feel a slowdown. Think of this as “rest and digest”— the opposite of the “fight or flight” response.

Another reason we feel the sudden need for zzz’s is thanks to high glucose levels in the blood stream. This triggers the release of insulin, which absorbs all amino acids—except for tryptophan.  Hello, heavy eyelids! Research also shows spikes in glucose can effectively switch off the neurons in the brain responsible for keeping us up and at ‘em. Glucose overload can also switch on the neurons that promote sleep (and turn us into those lazy couch potatoes). 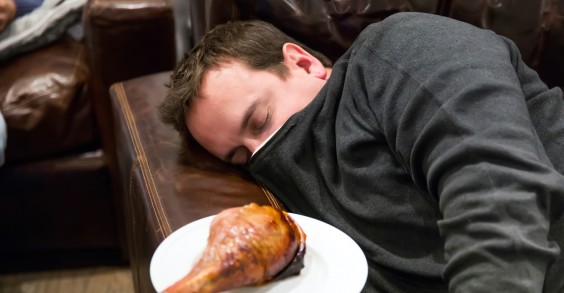 A post-meal nap might feel as much a tradition as watching theMacy’s Thanksgiving Day Parade, but here are some tips to avoid sleeping the whole day away: